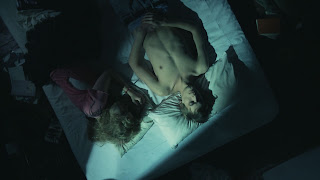 They walk together in a friendly atmosphere, staggering a little in their approximate path… talking about nothing… a persistent whistling is annoying their ears; it’s like if the basses were continuing to knock their brain out! Constantly and painfully… Their bodies are evolving together in a weird atmosphere… It looks like an apocalyptic situation… The industrial part of the city seems dead at night… Metallic bridges above them connecting two different kind of nothingness… a train goes past in a terrific noise of steel and rotating machine… any idea of time and space, of reality’s appearance are fading out and rebuilding at the same time… once, maybe… a human civilization took place there… they feel like drunken archaeologists digging through the ruins of an odd society… their undulating trajectories drive them from one point to the other… rusty cars in pieces, piles of used television, broken aerials, the ground is dusty and muddy, objects are spread around; an old radio, some red and blue lined sport shoes, empty beers…
-          It seems to be the biggest society’s compost!
-          Yeah or one of those Caspar Friedrich painting where you can see an old church falling apart on itself… The disappearance of God’s power… the system’s failure Mat speaks in a jerky way, between two hicks.
-          Nothing lasts forever… we’re ephemeral particles Mat…
-          Maybe, we’re mad scientists from the future, sent to observe the results of an oppressive an opulent society… look what we left behind

As to prove their thoughts and observation of collapsed history, a huge and threatening iron dinosaur is looking at them as they stagger nearby… Two opposite perceptions and systems are juxtaposing themselves… especially with that morning blue metallic light with grey reflects. Obscured by the brightness to come… walking from one place to the other, jumping around and laughing… All of a sudden, Ann grabs a rusty rod and starts to annoy the dinosaur’s sculpture… She’s digging into the reptile’s ass… Look Mat; I’m fucking history in the ass, don’t need a dick for that… and she’s laughing her head off… Mat is jumping to encourage her; Fuck the skeleton, let’s accelerate the fall! They’re feeling free and powerful… Ann is frantic as she’s enjoying the instant’s consume… Her body is moving in easiness in the air and she’s deeply concentrated on what she’s doing… Mat is like a child, running around the sculpture, shouting his extravaganza as loud as he can…
Around them other staggering silhouettes pass by and they always talk a few words to each other… like a community signal or something… a call from the unknown, a gathering significant figure… or just a sign to accentuate the feeling of being in the same boat… a sinking boat anyway.